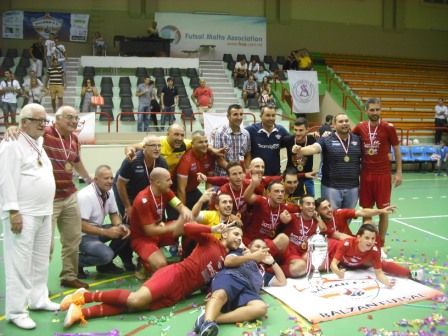 Balzan are the winners of this year’s Super Cup after beating Luxol 3-1 this evening to clinch the first honour of the season.

The game was generally balanced but Balzan probably deserved their win as they were the more dangerous side going forward, missing a host of chances in the first half.

Balzan had some new faces in their squad as Carl Azzopardi, Mark Zammit, Marco Conti, Matthew Attard and Frane Despotovic made their official debut. The latter showed his true leadership in the pitch as he orchestrated his team’s rearguard to perfection.

Luxol, who kept the core of the team that finished third last season, had official debuts for Peter Pullicino, Celino Alves, Reuben Grech and Omar Toutoungi.

In no time Balzan broke the deadlock after 2 minutes 30 seconds as Frane Despotovic directed a pass towards Nicola del Re down the left channel. The latter released a low drive to stab home and make 1-0.

Two minutes later, Balzan doubled the score when Nicola del Re took advantage of a Luxol’s defensive frail and put the unmarked Boycho Marev ready to slot into the net.

On 7 minutes, Luxol produced the first real opportunity as Dale Camilleri turned well to shoot behind Matthew Xerxen, the Balzan keeper, but Frane Despotovic was on hand to clear off the line.

On 9 minutes, Luxol went close again as an audacious shot by Florin Anton sailed over the bar.

Then it was Reuben Grech that performed two quickfire saves on Mark Zammit to deny the Balzan forward.

On the other end, Brazilian William Barbosa was denied by two smart saves from Balzan’s keeper Matthew Xerxen.

The same Barbosa was unlucky one minute from the break when his low effort hit the bar.

The Balzan keeper again came to his side’s rescue when tipping away Celino Alves’s piledriver.

Both teams brought  more intensity to their game as the second half gathered momentum.

On 24 minutes, Florin Anton tried his luck again but his shot finished wide.

Balzan could have made it three but Glenn Bonello, well served by Marev, surprisingly  hit wide.

With 8 minutes remaining, Celino Alves swung in a dangerous lob that was diverted with difficulty by the inspiring Xerxen.

One minute later, Luxol reduced the deficit when Celino Alves received Peter Pullicino’s corner and hammered past Matthew Xerxen to make it 2-1.

The Brazilian was then shown the red card after two successive yellow cards.

Balzan tried to take advantage of their numerical superiority as Reuben Grech produced two important saves on Frane Despotovic and Mark Zammit to keep his side in the game.

Again it was Boycho Marev who produced the show when he took advantage of a Luxol’s defensive blunder to deliver a stunning shot that finished inside the net and make it 3-1.

Luxol could have reduced the arrears but Peter Pullicino’s shot hit the bar.

Two minutes from the end, Luxol opted for the flying keeper to exert pressure on the Balzan rearguard.

Despite all this, Balzan kept their cool till the last seconds to win deservedly the first trophy of the season. 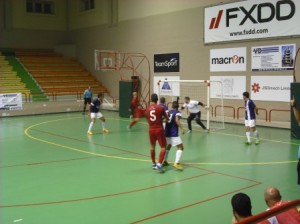