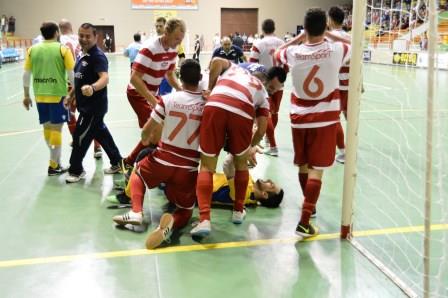 Nicholas Farrugia was Balzan’s hero last night as he managed to perform a string of exceptional saves to deny the Paolites both during the match and even during the penalty shoot-out.

This match, between the top two teams of Maltese futsal, brought a good number of supporters at the Corradino Pavillion.

Two minutes later, Balzan surged ahead when Raducu delivered a good pass to Andrea Dan who turned quickly to put the  ball into the net.

Balzan quickly doubled the score when Romanian international Emil Raducu found the net from a close angle to put the ball home.

Hibernians reacted swiftly and in their first real opportunity, they reduced the arrears from a direct freekick by Jose Carlos Lopez Meizoso who surprised the Balzan keeper.

This goal galvanized the Paolites that took advantage of their opponents’ defensive blunder and level the score from Mark Zammit who put the ball into the empty net and make it 2-2.

On 13 minutes Balzan’s player/coach Gabriel Dobre tried his luck with a fierce shot but Cassar produced an exceptional save.

30 seconds later it was Dan whose powerful hit finished high.

On 19 minutes, Balzan wasted a great opportunity to surge ahead when Milijic’s shot hit the post and from the rebound Clint Cope headed wide.

On the  cusp of half-time, Melvin Borg veered to his right to evade the onrushing Milijic but his shot finished wide from the post.

In the second half, Balzan had a shocking start as they scored twice to extend their advantage over their opponents.

First Gabriel Dobre delivered an exact and powerful drive that left no chance to Cassar while 50 seconds later Andrea Dan saw his powerful effort finishing into the net to make it 4-2.

Balzan were monopolizing the ball possession as Dan delivered to Raducu whose shot finished wide.

This monopolization lasted shortly as Hibs again reduced the score when Brazilian Celino Alves passed to Jose Carlos Lopez Meizoso who returned the favour to Alves who put the ball home amongst the joy of the Paolites team.

Lurking in the Balzan box, David Bobokhidze left his marker behind him to guide a low shot that finished wide on 26 minutes.

Hibs were now surging forward in search of parity. And it was here that one could notice Nicholas Farrugia’s goalkeeping skills as he repelled exceptionally five serious goal scoring opportunies through Lopez, Zammit and Alves respectively.

Eventually the Paolites adopted the flying keeper Lopez who added more bonus to their attacking objectives.

In fact as the clock ticked around to 40 minutes, Hibernians managed to level matters when after a confusing action, Jose Carlos Lopez Meizoso succeeded to put the ball into the net and score the incredible 4-4 score.

The match eventually drifted into the penalty shoot-out.

Balzan scored their penalties through Raducu, Dan, Milijic, Scicluna and Cope. Dobre and Bonello failed to capitalize their respective penalties.

Hibs converted their shots through Lopez, Zammit, Saliba and Cohen with Borg, Sciberras and Micallef missing the target.

Balzan emerged the final winners 9-8 to gain a good advantage till next Tuesday when both sides meet for the second leg of the final.