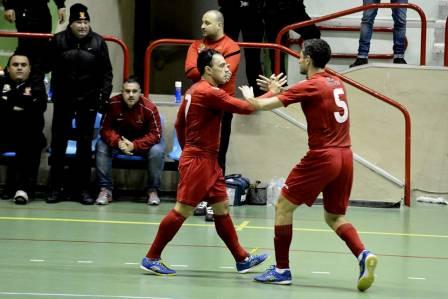 Serbian international Slobodan Janjic was three times on the mark as Balzan outpaced Valletta to win 10-2 and close in on a fourth final in three years.

The KO holders were simply irresistible as they dominated the first half and broke the deadlock after three minutes when Mark Zammit reached a Frane Despotovic pass to slot home.

Despite all this, the Valletta custodian was beaten one minute later after a fierce drive by Slobodan Janjic finished at the back of the net.

Valletta tried to react and on 7 minutes Xavier Saliba’s shot was repelled by Nicholas Farrugia.

Once the early advances subsided, Balzan continued to dominate possession and their incessant pressing forced Valletta to move the ball quickly out of defence. Trio Marev-Despotovic-Janjic looked dangerous on either flank and the latter managed to score Balzan’s third after taking advantage of a rebound.
The Citizens were stunned and found it difficult to absorb their opponents non-stop offensive display.

In a swift counter attack Karl Azzopardi fired home to make it 4-0 for Balzan.

Valletta, buoyed by a mammoth task to overcome this heavy deficit did make a reaction as Saliba’s lob finished just wide from Farrugia’s goalpost.

Seven seconds before the break, Javier Montes Burgos reduced the arrears for Valletta to make it 5-1.

The Citizens regained their composure after the interval, but were undone once more six minutes after it, as Balzan increased their tally.

Frane Despotovic‘s freekick went straight into the net for the joy of Balzan’s supporters.

Glenn Bonello was on the mark on 27 minutes after applying his finishing touch as his team conducted a swift counter-attack.

This goal didn’t discourage Balzan as they continued to surge forward and managed to find two more goals through Mark Zammit and Slobodan Janjic.

The latter received a standing ovation after an amazing back-heel effort to make it 9-2.