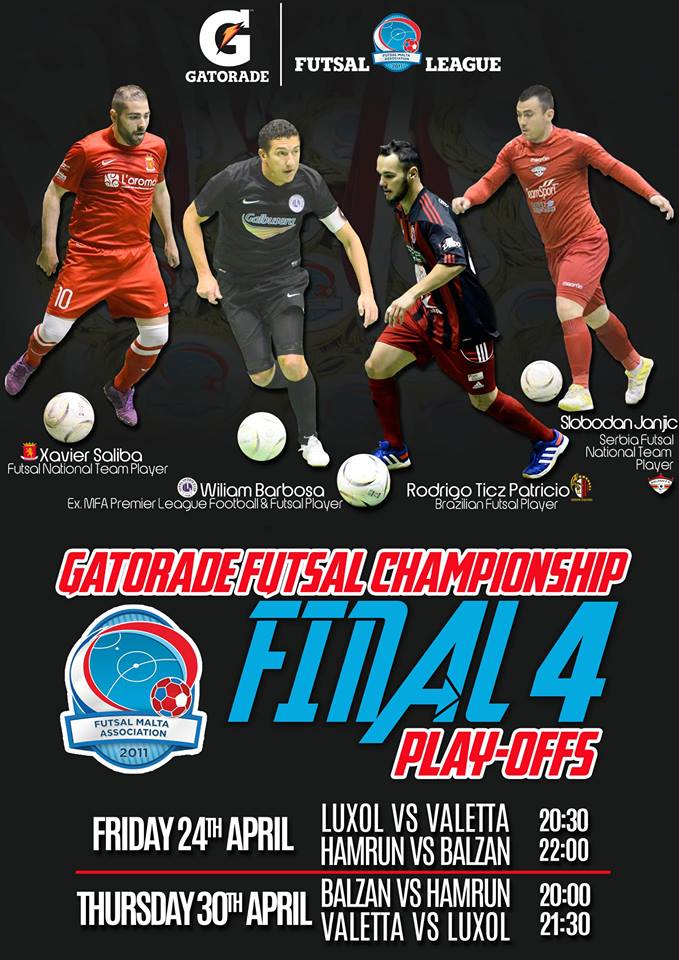 The Gatorade Futsal Premier League has reached a decisive phase as four teams will cross swords in the play-offs to be played this week. In the first leg to be played tonight champions Balzan play against Hamrun while league leaders Luxol face the revelation Valletta.

Luxol start as favourites in the first leg clash against Valletta (kick-off – 20.00 hrs).

However they cannot underestimate Valletta, who were promoted to Premier Division status last year, having a great campaign and placing fourth in the standings.

They hope that their inspirational players Javier Montes Burgos, Xavier Saliba and striker Denis di Maio will be in top form to pose great threat to the Luxol rearguard.

On the other hand, Luxol will try to achieve the objective of winning the league for the first time since the FMA took charge of the local futsal competitions.

Obviously the St Andrews outfit will rely on Brazilian duo Alves-Barbosa to instill their usual pressure to their opponents defensive department.

Both teams have faced each other twice in the league with the St Andrews side winning both encounters 4-3 and 7-2 respectively.

On the other hand, Balzan face a tough test when they take on second-placed Hamrun Spartans  (kick-off -21.30 hrs). The former are determined to clinch another treble of titles after having already won the Super Cup and are finalists in the Gatorade Futsal KO competition.

Hamrun, who had a successful campaign, will try to surprise all odds and show they would be a hard nut to crack.

In their two encounters this season, Hamrun saw off  Balzan  7-2 . However in the second round Balzan triumphed 5-3 over their opponents.

In these double headers, the team with the best aggregate result will qualify for the finals. If at the end of the second leg, the match ends in a draw, extra-time will be played following which penalties will decide the winner of the contest.