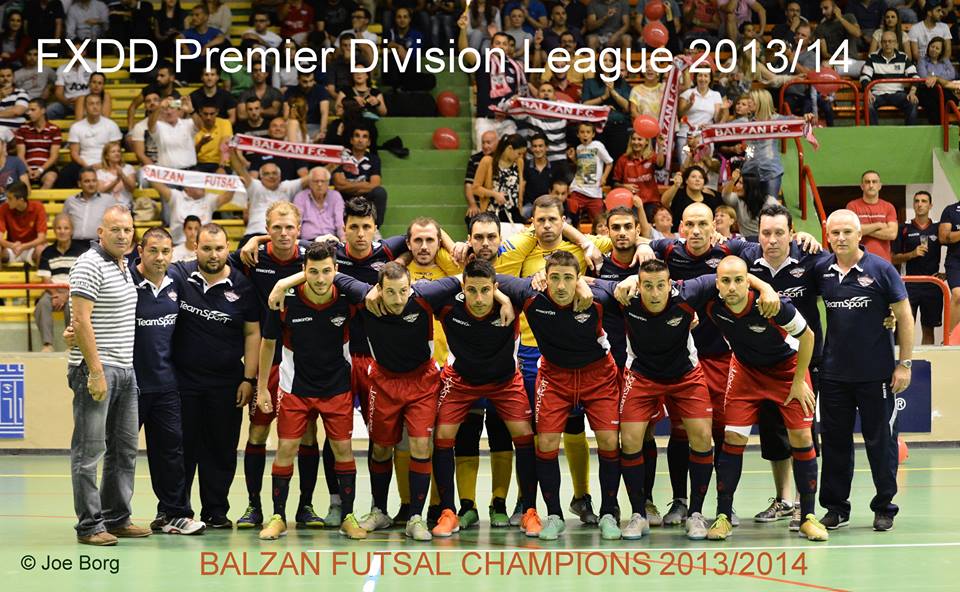 Balzan  overcame the stiff resistance of Hibernians to win the FXDD Premier Division Championship 9-8 on penalties and clinch their third success of the season after having already won the Super Cup and the FXDD Knock-Out competition.

Nicholas Farrugia was once again decisive as he greatly saved Xavier Saliba’s penalty to help his team crown an extraordinary season.

Hibernians needed a win; the pressure was on them after having lost the first leg. Balzan had the psychological advantage of having the first result into their favour so they tried to control the proceedings.

The match, played in front of one of the biggest crowd this season at the Corradino Pavillion, was a vibrant one with both teams producing a good level of futsal.

Balzan took 1 minute and a half to surge ahead when Emil Raducu‘s first timer surprised Hibs keeper Cassar.

Hibernians were quick to react as Balzan’s goalie Nicholas Farrugia was excellent to repel a double shot by Mark Zammit.

The Paolites were trying hard to level the score and Melvin Borg was unlucky not to connect a Celino Alves’ pass.

Two minutes, Balzan scored again. Raducu again played a prominent role as he advanced on the right before hitting a cross-shot that eluded the  Hibs defence and Glenn Bonello tapped the loose ball into the net.

The Paolites were unlucky between the 18th and 19th minute as two consecutive shots by Mark Zammit and Jose Carlos Meizoso Lopez hit the post.

Hibs reduced the score 40 seconds before the break when from an exact corner taken by Celino Alves, Mark Zammit hit immediately to put past Farrugia to make it 2-1.

After the break Brazilian star player Celino Alves stunned the Balzan rearguard as he scored two quickfire goals to turn the tables for Hibernians.

First he took advantage of a short clearance by Andrea Dan to deposit the ball inside the net while in the second occasion he dribbled past two Balzan players before hitting a fierce drive which gave no chance to Farrugia to make it 3-2 for Hibs.

The Paolites were now dominating the proceedings as Mark Zammit had two consecutive opportunites that finished just wide.

During this time, Balzan decided to call a time-out to make some tactical changes. In fact, player-coach Gabriel Dobre opted for Emil Raducu as the flying keeper to give more impact to his team’s offensive department.

On 30 minutes, Raducu, Bonello and Dobre had some golden opportunites to level the score but the Hibs rearguard succeeded to absorb their opponents’ attacks.

Glenn Bonello highlighted his opportunistic skills when he found the ball in his feet and hit the target from close range to make it 3-3.

Celino Alves had a great opportunity to regain advantage for his team but his shot was ably repelled by Matthew Xerxen.

At the end of the contest, FMA future president Mark Borg alongside an FXDD representative presented the trophy and medals to Balzan’s captain Carlo Scicluna amongst the joy of  players, staff and supporters.