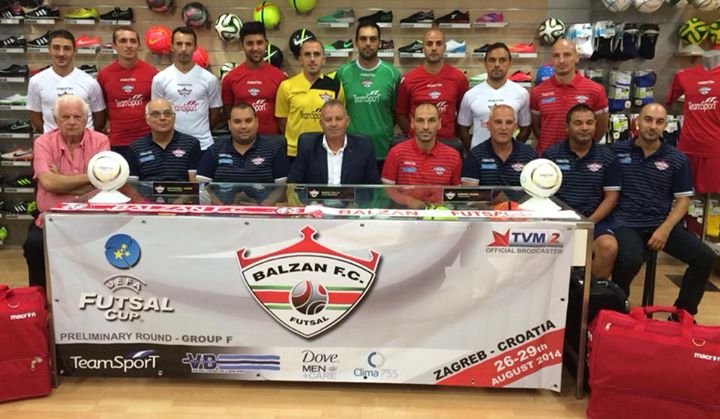 Tomorrow around noon, Balzan Futsal will depart from the Malta International Airport to their much awaited participation in UEFA Futsal Cup 2014/15.

Balzan are in Preliminary Round Group F together with Croatian Champions MNK Alumnus and Danish Champions København.

Balzan’s opening match is scheduled on Wednesday against MNK Alumnus at 8pm.

The other match against København is set for Thursday at 8pm.

During last Friday’s press conference at Team Sport in Iklin, player coach Gabriel Dobre remarked that the opening match on Wednesday against MNK Alumnus, needs to be a good one.

The opponents are professional futsal players and that means that Balzan need to work harder on the day.

During the last month all players attended to all training sessions which were held almost everyday and had two friendly matches against Gzira and Lija.

These friendly matches were important to measure the level of confidence of the team and to have a clearer picture of the players’ situation.

The two ex-Romanian national team players Tony Luliu Safar and Adrian Panzaru together with Mark Zammit and Matthew Attard from Hibernians, Carl Azzopardi from Pembroke and the return of Eslam Khalifa from Luxol were this summer’s acquisitions for Balzan to strengthen the squad.

Dobre worked hard with his boys to have the ideal strategy for the first game in the UEFA Futsal Cup.

In fact he’s happy with the strategy on paper which now needs to be put in practice on what they decide to play on pitch.