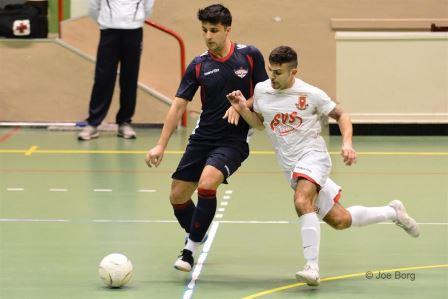 Balzan will be looking to confirm their status of FXDD Knock-Out holders when they face Vittoriosa Stars tonight in the final to be held at the Corradino Pavillion . (Kick-Off 20.30)

Gabriel Dobre’s side has already added one trophy to their cabinet this season when they won the Super Cup.

Balzan , who are joint second with Luxol in the Championship,  have no selection problems as Gabriel Dobre can bank  on a full squad.

Vittoriosa Stars, who are still in the relegation zone, will be without Ryan Mifsud who is nursing an injury and the inclusion of Clive Calleja is still in doubt.

On the other hand Vittoriosa have surprised all odds as they booked a place in the final having ousted Melita (7-4),  Zurrieq (5-1) and Zabbar (8-6).  Regardless of the result, they have already written a new chapter in the club history.

This website has asked Balzan’s player/coach Gabriel Dobre to give an overview about this decisive match.

“I think it will be a good futsal match. Vittoriosa can be described as a strong and united group both inside and outside the pitch. This fact made a great difference in the semi-final they played against Zabbar. They fight till the last second.”

When asked about the fact that they are being considered as favourites to win the trophy, Dobre was cautious.

“I can say that in this knock-out stage everyone has an equal chance. We are preparing for this match seriously like every other fixture.”

“There is no hiding that we will start as favourites for this match but we have enough experience in the game of futsal and we know that if one takes the game lightly we might be punished.”

“We are looking forward for this match as it will start to build our momentum for the crucial part of the season.”

For Cope it will be a special match because he’s playing against his hometown Vittoriosa.

This website also contacted Vittoriosa Communication’s Coordinator and player, Darren Lynch to give us an insight of this historic match for the Cottonera side.

“Starting as underdogs suits us…it means that there is no pressure on us so we can play our own game.

For all the players, staff and supporters this is great day. It’s our first final. It is a great moment for all of us and for sure we are going to enjoy it…we will enjoy it even more if we win.  Whatever the outcome, we can say that we were finalists of the FXDD Knock-Out competition. This is a big achievement for our young club. “

Both teams have already met in a league encounter last January.

During that match Balzan dominated Vittoriosa 10-2 with Glenn Bonello hitting a hat-trick, Andrea Dan and  Jovica Milijic scored a brace while Giancarlo Sammut, Zeljko Anicic and Rennie Tanti completed the result for the holders.