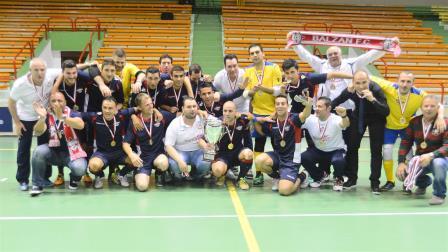 In the FXDD Knock-Out Competition, regarded as the second most coveted honour in Maltese futsal, Balzan and Vittoriosa were intent on winning this competition when they faced off in yesterday’s final played at the Corradino  Pavillion.

Although on paper, Balzan were favourites to retain the honour, Vittoriosa were widely fancied to make a contest of it as they pursued their first KO honour having already made a historic feat by reaching the final stage of the competition.

It was the second time that both teams faced each other as Balzan won the league encounter 10-2.

Vittoriosa’s formation lacked the services of the injured Ryan Mifsud and Clive Calleja.

Player/coach, Gabriel Dobre could bank on the full squad leaving himself out of the match to give chance to other players as he adopted the rotation system.

Balzan produced a commanding performance to impose themselves and win their second honour of the season.

The Cottonera side tried to bridge their technical gap with their opponents through sheer determination and hard work but they were overwhelmed by the more experienced Balzan.

As the clock struck the third minute, Balzan went ahead when Boycho Marev capitalised well an Emil Raducu’s freekick and with a first timer gave no chance to Vittoriosa keeper Gabriel Mansueto.

But this goal proved to be an injection to the Cottonera side as they levelled matters in their first real goal scoring occasion.

It was Sean Vella who took advantage of a defensive blunder to hit past the Balzan keeper to make it 1-1 among the joy of the Vittoriosa reserve bench.

Immediately after a fierce shot by Boycho Marev hit the post to deny Balzan’s advantage.

Balzan regained advantage towards the sixth minute as from a Raducu’s corner another great shot by Boycho Marev found the net.

This was a signal for Balzan who bursted forward to regain the advantage. They succeeded to score three times before half-time through Boycho Marev, Emil Raducu and Carlos Scicluna to extend the result for their team.

As the game resumed after the break, Vittoriosa threatened again with a Sean Vella’s shot but the Balzan keeper denied him with a good save.

That was until substitute Glenn Bonello came to the fore, scoring a quickfire hat-trick between the 27th and 30th minute to effectively end the game as a contest.

Balzan were keeping the pressure on their opponents who had to absorb their continuous attacks. Vittoriosa’s subsitute keeper Christopher Azzopardi had to deny a Giancarlo Sammut low drive with Rennie Tanti hitting the post two minutes afterwards.

In a rare counter attack Sean Vella, undoubtedly one of Vittoriosa’s best players, had his fierce shot repelled by Balzan’s goalie Reuben Grech.

One minute from the end, Balzan added another goal when Giancarlo Sammut, well served by Rennie Tanti found the net amongst the joy of the numerous Balzan supporters.