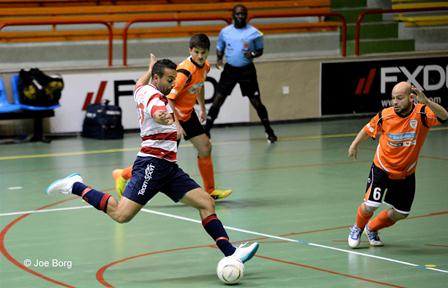 Balzan rolled past Mosta with a dominating 14-0 victory in their 12th match of the FXDD Premier League.

Boicho Marev made his debut for Balzan and contributed a hat trick while continued giving strength to the squad.

The 14 goals set was also made up of another hat trick by Glenn Bonello, four goals by Emil Andrei Raducu and a goal each from Nicola Delre, Carlos Scicluna, Jovica Milijic and Giancarlo Sammut.

In another thrilling and more balanced match, Luxol continued their positive track at the top of the table after beating their neighbours Melita 9-3.

As from the very early instances of the match both teams played good futsal and the result was fair.

The other three goals came from Florin Anton, Eslam Kalifa and Karl Saliba.

Next week’s big match between Balzan and Luxol will be definitely an amazing game for all local futsal lovers.

In fact Luxol will be only a point ahead from Balzan.