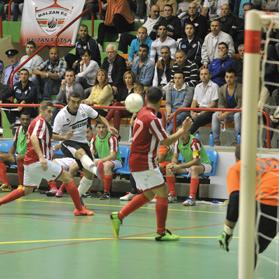 Two of the major protagonists in last season’s FXDD Premier Division Championship face off tonight when Balzan take on Hibernians at the Corradino Pavillion (kick-off: 21.30).

Although these are still early days, the importance of this fixture remains high, especially for the two teams whose rivalry escalated considerably in the last few months  with both teams consistently engaged in the fight for the main honours.

Both of them have a perfect record so far as they have won all the matches played in the championship. Despite all this, Hibernians suffered a shock elimination from the Knock Out competition after being ousted by Zabbar 5-4. They didn’t have an easy task last week when they narrowly beat San Gwann 5-4 in the league. Therefore the  Paolites must rise for the occasion to grab the precious points at stake.

This website contacted captain Xavier Saliba about tonight’s big match.He said that it will be a difficult match for Hibernians. Certainly it will be an entertaining match as has been so far when these teams meet against each other. Saliba admitted that his  team is not passing through a positive patch especially after the elimination from the KO. The fact that they don’t start as favourites can be an advantage for them.

Saliba concludes by saying that his team will be perfectly concentrated for this match and will try to win the three points to maintain their perfect record in the league.

On the other hand, Balzan have maintained their top form so far winning all the matches played both in the league and in the KO. They have found another top player in Andrea Dan who scored decisive goals for his team. They will be in full squad for this match with player coach Gabriel Dobre returning after a spell with the Romanian National team.

This website talked to Nathan Jones, a key member of the Balzan contingent. He told us that they are regarding this match as a normal fixture. His team is focused and prepared to face the Paolites and they will try to maintain their positive patch so far.

On the other hand player-coach Gabriel Dobre recognized this match as a derby between two of the best teams in the  championship. It will be an important game but not a decisive one. Hibs will try to come back after  their defeat in the KO and for sure they will be extra motivated for this game.  On the other part us Balzan will try to do their game and take the three important points.

Finally Dobre hopes that tonight it will be a great game between two of the best futsal teams on the island .

The two teams have met each other in the Super Cup last September. Balzan managed to grab the  first honour of the season after beating Hibernians 5-1 in a thrilling match played in front of a sizable crowd.