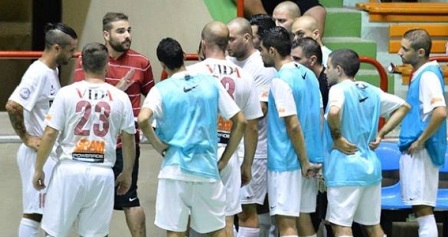 He works as a store keeper.

Xavier has been coaching futsal for 3 years now, where in 2 of them he coached San Gwann and they won 2 promotions as champions from the 2nd to the 1st division and from the 1st division to the Premier Division.

At the moment he’s coaching Valletta and this is a new challenge which started with a lot of difficulties because they lost 5 of the 7 first games.

Valletta made a run of 13 games without defeat and if they win the 4 games left they will be crowned first division champions.

Before he started coaching, he played futsal and he’s still playing with Hibernians as he immediately felt in love with the game.

San Gwann was the first team that gave him the opportunity and he accepted without hesitation, thanks to Jesmond Musu and Karl Azzopardi.

Xavier describes futsal as a very exciting game, played in small spaces and requires to have fast thinking and be technically good. Team work is required for a futsal team to succeed or else you concede goals easily.

Xavier considers himself as a demanding coach with his players and lives every match in a very intensive way without sitting down and continuously giving instructions. He admits that he feels to be a bad loser!

Finally Xavier said that they have to be focused for the last 4 matches so that what they have built in these months could become real and  be promoted as champions too!

His personal objective as a coach is that one day he would like to win the Premier Division as a coach and become the national team’s coach even though he feels young for such a responsibility!