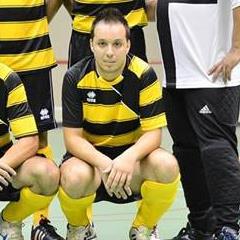 Works at the Stores and Packing Department for a local company.

His personal motto says: “Whatever happens never give up!”

About seven years ago, Hamrun Spartans decided to form a futsal team from players that used to be part of their nursery. I was informed about it and really liked the idea. I was really happy to play with Hamrun.
Then after sometime they opted to change some players.

Despite all this, I still wanted to flourish my futsal career and continued to develop some important skills elsewhere.


Did you know about futsal before?

Well I’ve actually heard about it but my idea was that futsal consisted of a normal five-a-side football match. Actually it’s a bit different from that!

What is the difference between futsal and football?

As I said before, there is a big difference! First of all, in football you have some time to think what to do with the ball while in futsal you have to be quick-minded as it is a very  fast game. Without doubt if you make a mistake it prove costly for your team so I confirm that futsal and football are relatively different.

Your best moment in futsal so far.


Well there were actually two great moments that I still cherish in my futsal career. The first one is when I made my official debut with Hamrun Spartans. I remember that all of us loved to play for Hamrun and we felt proud to represent our native town.

The second moment happened this  year when I scored my first goal with Zabbar. Although I am not from this village, I still feel I am part of a great family that takes care of us and promotes unity.

Your experience so far with Zabbar.

As I said, I am very happy with this team.  The committee works so hard to improve its level and we are being treated very well. I feel that I am part of this family and succeeded to make new friends.

Who is that player that you really admire?

I believe that you can learn from everyone but to tell you the truth if I were to select a player,  I would choose Glenn Barry. He has made a name for himself, has a lot of experience not only in futsal but also in football and I have learnt a lot from him. He tells you where you can improve and gives you a lot of advices.

What are your objectives for this season?

Our main objective is to confirm ourselves among the top eight of the league.

Your personal objectives for the future.

I don’t like to look so far in the future but my greatest desire is to continue playing futsal for the years ahead. More than that, my personal wish is to join a football team next season and pursue further my career.