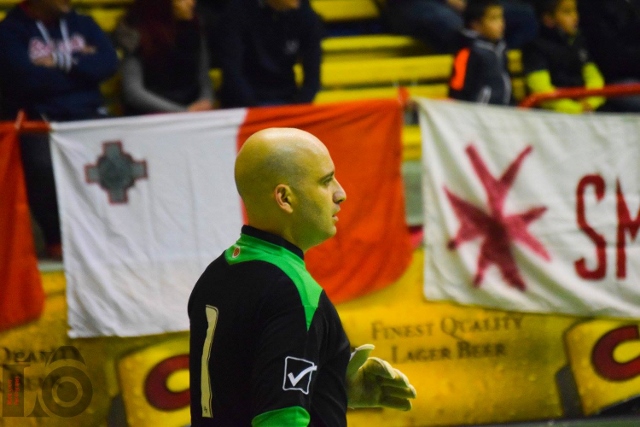 Works as a medical doctor

Plays as a goalkeeper with Valletta

My long time friend John Cutajar had been playing futsal for a number of years, and had long since trying to lure me into futsal. I was reluctant due to heavy work commitments that had originally forced me to leave football. Finally I gave in and was drafted to replace the goalkeeper at Naxxar Motors way back in 2008 who were at the time led by Jesmond Caruana . I quickly secured my place and never looked back since.

Talk about the teams you have played with so far.

I haven’t journeyed much, having played exclusively with Naxxar Motors for 4 amazing years (where we have won 3 KOs and reached the final twice out of 4 semifinal playoffs) before stopping due to personal reasons. I was asked to join newly promoted side San Gwann in 2013 by Leandros Calleja who was their coach at the time. Narrowly missing out on a place in the final the following year together with a strong nucleus of San Gwann players and including the coach I joined Valletta where I am to this day. During these years I have been lucky enough to be called up to play with the national team under the helm of first Vic Hermans and subsequently Mark Marlow, who also handed my the honour of captaining the side.

Futsal is a fast game where everyone needs to give his utmost. Everyone is involved in the game, unlike football where subs are sometimes only introduced late in the game. In my opinion it is more thrilling and more exciting to watch, and I believe there is much more scope for improvement locally. Can’t say I dislike anything as such about futsal….Unless you mean futsal in Malta where I could list a million things…

We are aiming to better last year’s result, hence our objective is to reach the final. And then who knows? Besides being a strong side we are also a very close-knit group and so far we have trained hard to achieve them. So we hope for a good season!

My personal objectives are to enjoy the game as much as possible and naturally aid my team in securing its objectives.