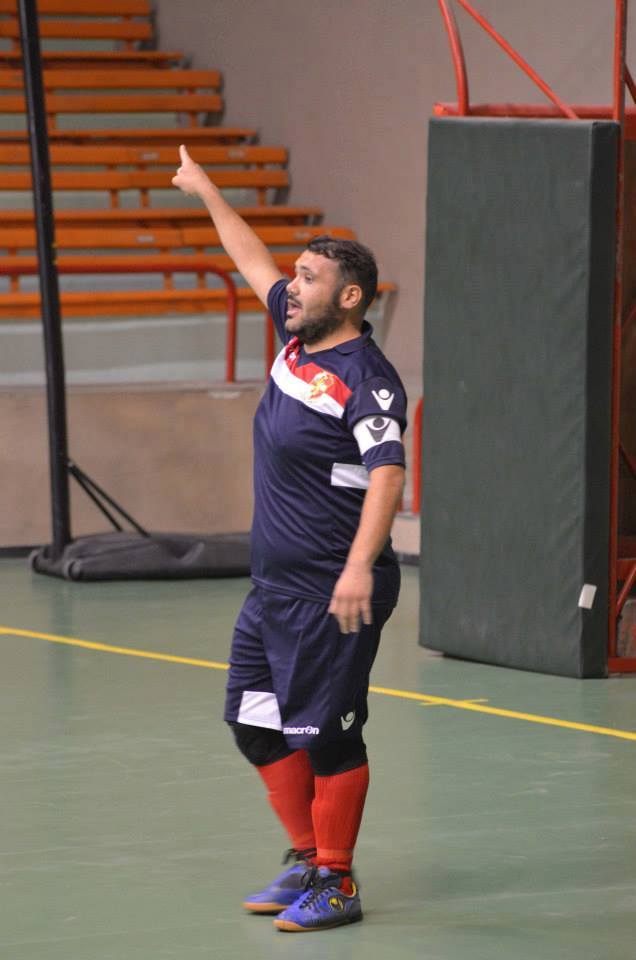 Plays as a goalkeeper for Naxxar Lions.

He considers the village of Naxxar as being part and parcel of his life.

Well it’s a long story! Personally I consider myself passionate about football.

In the past, although many of my friends were training with Naxxar Lions, I didn’t have enough courage to practice football. As a child, I used to play football in the local MUSEUM together with the eventually well-known players Paul Fenech and Victor Bellia. I used to play as a goalkeeper and really impressed my friends. At that time, I didn’t even consider to play with an official football club.

A few years later, I began to train as a goalkeeper with the minors of Naxxar Lions. Despite all this I still didn’t succeed so much between the goalposts.

Although I used to play some five-a-side matches with friends, I hadn’t heard anything at all about Futsal.

Once when I was watching TV, I saw the Italian National Futsal goalkeeper Gianfranco Angelini who produced a string of great saves to help his team win the European Cup in 2003. Four years later, I was contacted by Elton Vella and Consiglio D’Amato to be part of a futsal team that was being formed. I accepted gladly and that was my baptism in this beautiful game.

My first official futsal season dates back to eight years ago. I joined a team called Cougars and it was made up of some dedicated people are passionate about this game. I was appointed as the team’s captain and this made me so proud.

Although the first results were not encouraging, we used to train hard.

My turning point in this sport came one year later when another group of friends contacted me and decided to set up a new team. We named it Todos and it was our dream come true. The group was made up of some ex-football players like Kurt Bartolo, Kurt Azzopardi and Daniel Brincat.

I can admit that this team changed my life completely, I made new friends and in four years we reached the top of the league. Todos were the team to beat.

Due to the reforms that the FMA had set up last year, Todos made an engagement with Floriana FC to participate in last year’s Futsal Premier Division for the first time. Unfortunately the team had to be dismantled and I had to find another club.

This year I was lucky to represent my hometown Naxxar in this league and I am overwhelmed by this opportunity.

Your best moment so far in Futsal.

The moment that I will never forget was the first promotion that I won with Todos. We were playing in the fourth division which consisted of 40 teams. It was really an achievement for the club to be in the top four. Unfortunately we were unlucky not to finish champions during that year.

Your best match so far.

There are a lot of matches that I remember very well. But in particular the most memorable game was against Hamrun Spartans. It was the day when we were crowned First Division champions. I was unlucky not to play so much during that season but during this match I played again between the goalposts and produced one of the best matches so far in my futsal career.

It means a lot for me. Naxxar in part of my life. It’s in my blood. I was born in Naxxar and I’ll die in Naxxar. Now that I have the opportunity to represent my hometown, I’ll do my best and why not make our dream come true.

6.       Therefore the question comes naturally. What are your main objectives for this season?

First of all we have to be a team as that is the key for success. Unfortunately the initial three matches didn’t produce good results but I’m certain that our team will have a better future. I believe in our coaches, Daniel Brincat and Kurt Bartolo. They know the feeling of being a futsal player and support us a lot. If we keep united, I’m sure we will climb in a higher position in the standings.

7.      Finally what are you main future objectives in this game?

For now, I prefer to focus on the present. Nobody knows what the future will hold. The fact that I’m representing my hometown makes me proud and motivates me a lot. I always try to look at the bright side of life. So hope we’ll have a better future in futsal.