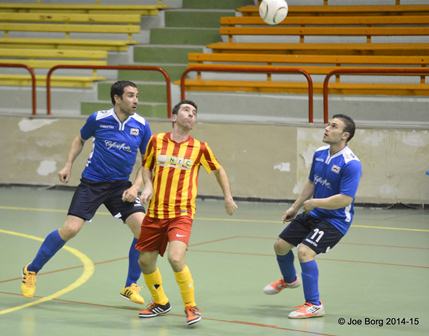 Works as a teacher

How did you start playing futsal?

I started three years ago, with Santa Lucia, a new team formed by my colleagues.

Speak about the teams you have played with so far.

I spent two years with Santa Lucia where we finished twice in the last place. Then, last year I joined Mellieħa and finished 2nd in the first division.

I like the fact that it is a quick game and is played indoors.

The best moment was during the first year with Santa Lucia, when we played against Siġġiewi in the second round. This was the first time that we experienced a win. We had not won a match before. We were winning 3-0 but then Siġġiewi managed to balance the score. However, at the very last minute I scored and brought the first victory to the club.

Last year ending in 2nd place with Mellieħa was also a great experience.

This year we are a newly formed team with almost all players having never played in the futsal league so far. Thus our objectives are to gain experience and give the best challenge possible to all teams.

My objectives are to continue playing, learning and enjoying thee beautiful game of futsal.