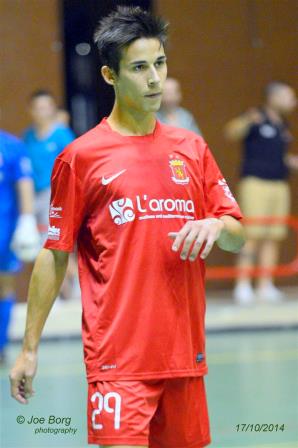 Works as a Demi-Chef with a local hotel in St Julians.

He loves his job and aims to learn and improve more in the food industry.

He admits of being in love with Malta and the Maltese. 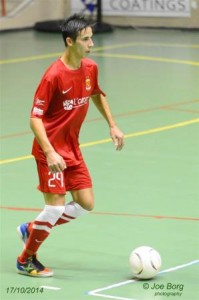 I started playing 11-a-side football since I was a child, but at the age of 16, I was called up by the local futsal coach to substitute a player who was disqualified. I remember that I played well and the coach wanted me even for the following season to be part of his squad

Well, both sports are completely different from each other. In football you have a larger area and one can show more his athletic skills.

On the other hand, futsal is mostly based on speed and  techniques . You’re involved in a lot of actions in a short span of time.

In football I have played with two amateur clubs,  Club Italia and Termitana Cascino.

In futsal, I started in 2012 with Virtus Termini in Serie C1 where I finished as the league top scorer with 58 goals. The following year I resumed my career with Serie B club San Isidoro where I had the chance to play as a semi professional.

Last season I had the chance to play in Malta with San Gwann  and now I am a Valletta player.

The most memorable moment in your career.

My most memorable moment happened at the end of the year 2013 when I came to Malta as San Gwann wanted me in their squad and I continued my goal scoring abilities as I hit the target 13 times in 10 matches. I mostly remember the play-off semifinal we’ve played against Hibernians where we almost made it to the final.

My personal objective is to win this year’s Premier Division. Eventually I would like to participate in the UEFA Futsal League with Valletta. Who knows, maybe I could play for the Maltese national team (Malta is in my heart, even though I was born in Italy).

How are you feeling with Valletta FC?

The experience with Valletta FC so far has been great. I feel part of their futsal family. The committee works so hard so that every player feels part of the club. I consider my team mates as my personal friends. I feel proud of donning the Valletta shirt.

I would like to thank my manager Fabrizio Aglieri Rinella, that is always by my side as well as Clayton Felice that has put a lot of trust in me.

I don’t want to forget my former Italian coach Gaetano Contiguglia from whom I’ve learnt a lot. 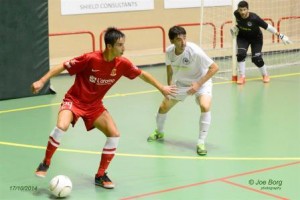