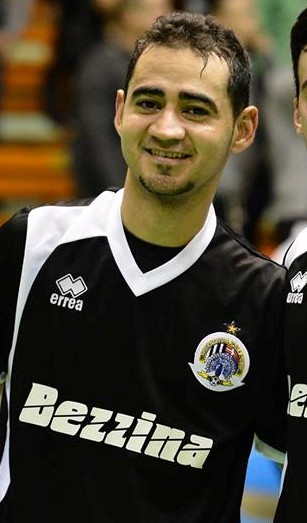 I began to play this beautiful sport since I was 6 years of age. I was always fascinated with this sport and loved to see Brazilian futsal players in action. I played with various amateur futsal clubs in Brazil.

Eventually, I became a professional player at the age of 17 years. From there on, I never  looked back.

Talk about the teams that you played with so far.

I have played with various Brazilian and Spanish futsal clubs namely Acesol Tucán FS, Avilés FS, Gijon El Llano FS, Gasifred Ibiza FS, Arcebansa Zamora FS and CA Gran Canaria FS. Everywhere I went,  I was always tried to do my best and during these years, I  have continued to develop my futsal skills.


Your experience when playing in the Spanish Futsal Liga.

I can admit that playing in the Spanish league has been one of the greatest achievements in my life. It was a very positive experience that helped me make my dream come true. I am very grateful to this country that gave me a lots of satisfaction and helped me to make new acquaintances.

How did you come to Malta?

I was approached from Hibernians Futsal Club in the January transfer window to form part of their squad. I liked the club’s project and I didn’t think twice to accept and  sign for the Paolites.

How are you finding life in Malta?

I  am really happy in Malta. I like the climate. The people are very warm and make you feel at ease. I would like to thank Hibernians Futsal Club for the great welcome  they have given me. I am feeling at home.

Your first official match with Hibernians was “a baptism of fire” as you played against Balzan, one of the strongest clubs in Malta.

Yes it’s true. I felt as if it was my real immediate test playing such an important match. I felt confident during this match and tried to help my team mates as much as I could. I was really satisfied that we won this delicate clash and that we kept our 100 % record.

Last Friday you have scored your first goal with Hibernians. Honestly it was a gem of a goal…

Honestly,  it was a great goal. In fact during the match against Melita I scored a hat-trick and it was really fantastic! I hope to score more important goals for Hibs.

What are your  objectives with Hibernians?

My main objective is to help Hibernians win the league for the second time in a row. Then afterwards I would like  to participate in the UEFA Futsal Cup and improve their placing from last year.