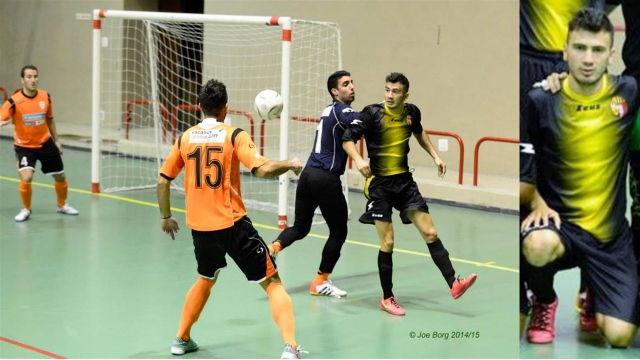 Works as a machine operator

Football and futsal are his life.

I started with Zejtun in 2012 with coach Mario Gaffiero, who now is Qormi’s coach.  I scored 24 goals in 13 matches, where I scored 5 goals (3 in premiership and 2 in knockout). I was top scorer in Albanian League with Ks Ali Demi and played also in Uefa Futsal Cup against Baku and Wisla Krakow.

Futsal is a more fast game and you have more contact with the ball. If you are good in futsal, you can have more chance to be the proganoist of the game. In futsal both playing and sitting on the bench you feel more emotions.

In Albania I used to play in Premiership and First 11 a side competitions. I also played with St. Patrick’s and Zejtun Corinthians in the First Division. For me this is the third season in futsal with Zejtun, Ks Ali Demi and now Qormi.

The most memorable moment in your career.

Playing in Uefa Futsal Cup and winning the cup in Albania.

This year I want to take Qormi in the Premier’s Play-offs and to start again playing 11 a side.

How are you feeling with Qormi FC?

I’m feeling very good and comfortable with my team mates, as many of them I already played with them before.

I thank my coach Mario Gaffiero who gave me the opportunity to start playing futsal in Malta. I also thank coach Alfred Attard who was my first coach in the 11 a side in Malta.