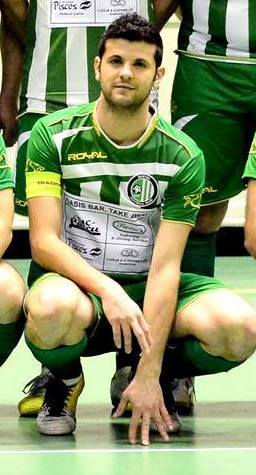 Works as a Medical Equipment Technician.

He has a passion for futsal, likes going out and is keen on videogames.

He doesn’t have a particular motto.

The first time I played futsal was when my friend Gordon Zammit told be to go for a trial with Scandals Futsal. On my first attempt, I really didn’t like the sport and therefore I continued to play 11-a-side football. After some time I tried my luck with Sliema Futsal, who were managed by Mario Gaffiero. This time I got involved in this game and from there on I continued to develop my skills.

What is the thing that fascinates you most in this game?

Well, I can say that futsal is a fast game and the player is continuously involved.

How are you getting along with Qrendi FC?

I am very happy with this team. Moreover I consider my team mates as one family and there is always respect between us.

Last year you failed promotion by a whisker. What is the team’s objective for this season?

In fact, as you said, last year we started the league with a bang. We were unbeaten until February but then something happened. Maybe we took some things for granted. We would like to challenge for promotion even though we know that all First Division sides are well equipped.

My personal objective is to help my team mates especially younger ones to develop more skills in this game. As I said, our main aim as a team is to be promoted to the Premier Division.

I would like to thank Qrendi Futsal for showing faith in me, especially the staff and players. Most of all I would like to say a big thanks to my wife who is always present at the Corradino Pavillion and supports me in every match that I play.