Works as a Procurement Manager.

I have been involved in futsal for… around 8 years. It was the period where this sport was gaining popularity on the island. The level of the game was not what we can see today, but it was the natural evolution phase to have a set up like we have today.

Futsal is… a tactical game where individual talent and team work have to be combined.

Being part of a futsal club entails… a lot of work. I am both a player in the squad and the Secretary of Birzebbuga St. Peters Futsal Club. Dedication on both ends means that this takes up a lot of time and energy especially in this fast evolving game.

Birzebbuga Futsal Club is… still a very modest team with limited resources. Even though this year was not the best in terms of results, we have been praised in several games by our opponents for the determination shown.

This year the committee is… satisfied of what happened in the second half of the season after a very poor performance run in the first round. A couple of new players helped us in our intentions, but training is the key. Unfortunately we have very limited resources on the island.

My greatest moments in futsal are… winning the knockout with the team called Capital Boys and a couple of years back when the team (at the time representing Marsaskala) was promoted after an incredible season.

My main objective is…to get the team competitive and at least start challenging in the lower division. From there we will build the foundations for future projects. 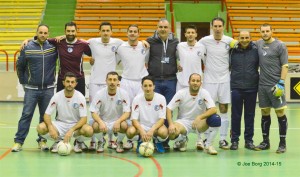