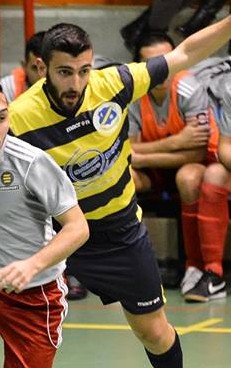 Work as a Software Engineer.

His motto is “Pain is temporary, Winning is forever.”

How long have you been playing futsal?

I’ve been playing futsal for these last three years. I have begun my futsal career with Todos FC.

How did everything begin?

Everything started when I decided to quit 11-a-side football. Then I was contacted by Leandros Calleja, former Todos FC coach who convinced me to try and  play futsal. From there on, I never looked back and I have learned a lot from this game.

Talk about the teams that you have played with.

As I have already said, I played my first season with Todos FC, a futsal team that was formed from a group of friends who achieved lots of success together. The team had a glorious history. During that particular season we succeeded to win the second division without defeat.

The following year, Todos FC changed their name to Floriana Futsal due to the FMA reform. We played in the Premier Division and we succeeded to leave a good impression.

Now I’m playing with San Gwann Futsal, another promoted team, who believes in unity and passion.

How are you feeling with San Gwann?

When I joined this team I had the advantage to know some players who played with me in the national team. This helped me a lot to integrate myself and feel at ease with the group. There is a mixture of young and experienced players who help each other to achieve success.

The level of futsal in Malta.

In my opinion, the level of futsal in Malta has increased in the last few years. It has developed more in every aspect. Nowadays sport lovers know what futsal is and more than that the FMA is  working hard to develop this sport furthermore.

The inclusion of some foreign international players has enhanced the game and is giving a major boost to its development.

Obviously there is still some room for some  improvement but I think we’re on the right track.

What is your opinion about San Gwann performance so far in the Premier Division?

Well I think that we could do better as I believe we have quite a good team. Our advantage is that we can improve and we’re trying all our best to do so.

What about your greatest wish?