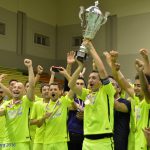 Gatorade KO holders Luxol were handed a tricky start to their title defence when they were drawn against Sliema as the draws of first round of the knock-out competition were held.
Champions Valletta were pitted against the debutant side of Tarxien Rainbows while last year’s finalists Hamrun Spartans were handed a comfortable draw when they were drawn against Qormi, another new side in the futsal scene.
Mriehel will play University of Malta while Swieqi sides will play against Zurrieq Wolves and Marsascala respectively.
Matches from the first round will be played between November 14 and 18:
14/11/2016 – Valletta FC vs Tarxien
15/11/2016 – Hamrun vs Qormi
17/11/2016 – Mriehel vs UOM
17/11/2016 – Swieqi FC vs Zurrieq Wolves
18/11/2016 – Qrendi vs Msida
18/11/2016 – Swieqi U21 vs Marsascala