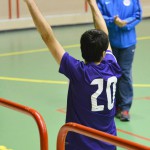 Luxol climbed first in the FXDD Premier Division standings after thumping Zurrieq 20-1. For the winners this was their twelfth victory of the season which enabled them to maintain their quest for the championship.

On the contrary Zurrieq suffered another heavy defeat after their 21-6 loss against Hibernians.

Both sides had their fair share of play in the first five minutes but after Luxol surged ahead there was no match for Zurrieq.

Ibrahim Tarik scored five goals, George Frendo, Noel Bray, Florin Anton, Basil Emeka and Dario Zampa scored a brace, Dean Gera and an own goal were among those who put their names on the scoresheet for the Luxol side.

In the second match Birzebbugia claimed their second victory of the season after seeing off Vittoriosa 3-1. This win enabled the southsiders to leave the bottom place of the table and reach Luqa with 7 points.

Kenneth Spiteri scored the only goal for the Cottonera side.

In the FXDD First Division Naxxar continued their good form after having the better of Kalkara 8-1. This victory helped the Lions to maintain their promotion hopes alive.

Naxxar had their brighter moments in the match and outclassed Kalkara who tried to make a reaction. Even though they restored parity, Kalkara found a good Naxxar rearguard who never lost concentration to grab the three important points.

Their goals were scored from a hat-trick by Adrian Fenech, a brace from Bernard Sciberras and a goal for Khail Drago, Andrew Catania and Lydon Baldacchino.

Meanwhile Gzira and Sirens shared the spoils in a 4-4 scoreline. 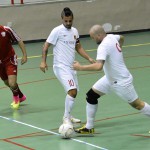 Valletta clinched their eighth consecutive success after seeing off leaders Qrendi 4-3. It was a thrilling match with the Citizens dictating the matters for most of the time and Qrendi making a late reaction to instill drama until the very end.

Qrendi broke the deadlock through Antonello Brincat but the Citizens quickly restored parity with Alexander Fenech.

From there on, Valletta took the initiative and found the net through Clayton Felice before half-time.

The Citizens dominated the first part of the second half keeping Qrendi’s keeper Dwayne Grech busy with some fine saves.

Valletta scored twice more with Dassier Borg and Charlton Scicluna to increase the advantage for their team.

Five minutes from the end, Qrendi got back into the match when Alan Spiteri lobbed the ball past Valletta’s keeper Neil Cuschieri.

They even continued to reduce the arrears with  a well-taken free-shot by Antonello Brincat to instill drama a few instances before the end.

Qrendi could have levelled matters one minute from the end when Jonathan Rogers failed to connect  Antonello Brincat’s cross-shot.

Valletta controlled the situation to obtain the three precious points that put them second in the table five points further from leaders Qrendi. 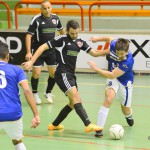 Zurrieq and Melita shared the spoils in an entertaining 4-4 draw in the FXDD Premier Division .

This point didn’t change their position in the standings as Melita lie tenth with Zurrieq still in the bottom places of the table.

It was a match that left all those present at the Corradino Pavillion on tenterhooks.

Melita’s keeper Ivan Cassar kept his team in the match after performing some good saves.

Tyron Borg proved to be Zurrieq’s hero after netting a hat-trick with Spanish Robin Alonso scoring the other goal.

Rudi and Michael Martin scored a brace for  Melita.

Vittoriosa defeated Luqa 3-1 to climb eleventh in the table and obtain their third win of the season.